Good day to all Tozen members.

I’m Ryu Aoyagi, member of Kudo local. We are here to celebrate our victory for the last CBA (collective bargaining agreement) to win some demands from Kudo management:

3. Agreement on addressing power harassment for all Kudo employees

4. Agreement on forklift assignment for Fred and eventually for Ryu 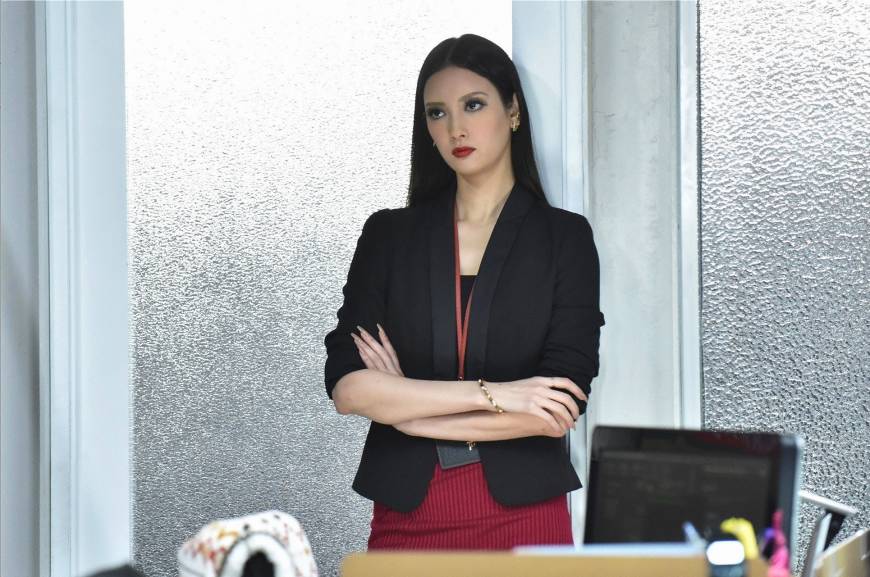 “You have the right to quit this company.”

The heroine utters this line at the climax of every episode of a TV drama series currently airing on Saturday nights, “Miss Devil” (“Devil of Human Resources”).

The setting is Kyoa Fire Insurance. Out of nowhere, a leggy beauty with sharp eyes and even sharper eyeliner arrives on the scene. The firm’s president reportedly headhunted her to overhaul corporate culture at Kyoa. Rumor has it that Mako Tsubaki made her name in the U.S. as a “termination consultant,” moving from place to place and firing people with outrageous abandon, cruelty and callousness (not unlike the character played by George Clooney in the 2009 film “Up in the Air”).

Miss Devil has a past shrouded in mystery, and employees are terrified of her — particularly one new hire, Hiroshi Saito. He is moved to a department whose sole mission is to find employees to downsize.

Each episode drops another crumb on a trail that seems to lead to some dark secret lurking in Tsubaki and the firm’s past, a secret that the final episode will surely reveal.

Famed actress Nanao (who prefers to go by one name) plays the main role. A former “race queen” (a Japanese term for grid girl, brolly dolly, or pit babe, i.e. a promotional model that hangs around at motor racing events), Nanao, at 172 cm, is quite tall for a Japanese woman — taller than many men. People say she is “nine heads tall,” and that is no exaggeration. What a stunning figure she has! And how intimidating it would be to stand next to her (I’m only 152 cm). We can understand why she was cast to play this cold-blooded ice queen.

The devil enlists the young Hiroshi to decide who should be fired next. In real life it makes no sense to target new hires for dismissal, but this is TV drama world, so they do. Incidentally, some fans have gleefully detected an S&M theme with the young, cute and shy Hiroshi juxtaposed against the tall, super-mini-skirted older woman/dominatrix.

OK, OK, you’re right: A TV drama is, at the end of the day, nothing more than mind-candy entertainment. Maybe it doesn’t even deserve to be contemplated or analyzed. Perhaps it’s my occupational hazard, but whenever I see a drama about labor issues, I cannot help but think about these things.

Although each standalone episode tackles tough issues facing workers today, the last scene of each episode destroys any semblance of authenticity as Miss Devil struts in her high heels onto the scene to thwart the villain and save the day.

A woman whose husband has terminal cancer is being sexually harassed by her boss. She needs the job to pay her husband’s medical bills, so she endures it.

A middle manager in his 40s must clean up the mess left by a young man in his 20s who spends all his time enjoying himself (heaven forbid) due to the company’s new no-overtime policy. His unfinished work ends up on others’ desks. The middle-aged man’s frustration eventually explodes.

A pregnant worker is exploited by her male boss to showcase the company’s woke attitude when it comes to women. She begs her boss to “let” her quit, but he refuses, so as to protect the firm’s we-don’t-commit-maternity-harassment reputation.

So who in the above episodes got the ax? (Warning! Spoilers begin here:) The woman whose husband has terminal cancer; the man in his 40s who cleans up his irresponsible junior’s mess; and — you guessed it — the pregnant woman.

So why do these workers who did nothing wrong — who were, in fact, being victimized — get fired? Young Hiroshi wonders the same thing and asks her directly.

Fortunately, Tsubaki clears up any confusion. The employee whose husband has cancer, for example, had fraudulently misrepresented her performance and even forged contracts in order to increase her wages. Tsubaki knew it (somehow) from the very beginning. The woman, now exposed, turns away and sobs quietly. Tsubaki faces her and says, “You have the right to quit this company,” then lays a pen and paper on the desk. The weeping woman writes “Resignation notice.”

The woman’s sexual harasser boss doesn’t get away scot-free, though. He tries to hug Tsubaki. She says deadpan: “You do this (sexual harassment) again, and you’ll get even worse that what you’re about to get.” And with that, in her high heels, she delivers a perfect roundhouse kick to the boss.

Young Hiroshi goes and meets the woman some time after her resignation, expecting her to be depressed. But in fact, she’s quite relieved. She had shocked herself by going as far as to commit fraud to pay her husband’s medical bills, but now she was free of that and free of the sexual harassment she had endured — and free to spend what little remaining time she had with her ill husband. (No mention is made of how the bills are now getting paid despite no wage income.) Hiroshi sees the joy in the woman’s face and realizes that Miss Devil is in fact a heroine.

The other stories are similar: Each firing has some deeper purpose that in the end benefits the hapless victim. This authoritarian lesson boils down to “It’s for your own good” and “I know what’s good for you more than you do yourself.” In each case, Miss Devil delivers the liberating line deadpan: “You have the right to resign from this company.”

Firing is your friend

What the heck? She roundhouses the bad guy but drives his victim out of the company? Yet each time she fires an employee or pressures an employee to resign, the ordeal is portrayed as a good deed and even a kindness to the victim.

She’s unreal — a cardboard cutout superhero, a female Ultraman or Power Ranger. The show’s writers insinuate that this “ax woman” is the only one who can expose the injustices and bullying happening at the company, and that her cruel persona is necessary to give her the opening to fight the good fight.

I cannot accept this whole premise. Of course, workers have the right to resign. But that choice is up to the individual’s free will, rather than something they should be pressured into. Another right is the right to continue to work at a workplace. Leaving is not the only solution to every job-related problem.

Each problem must be solved at the workplace, among workers. Tsubaki lacks that imagination. She sees — and we are asked to see — separation as the cure-all for workplace blues. Many viewers might wish a Miss Devil worked at their company to deal justice to a hated boss, but one person alone cannot create a good workplace environment.

Another premise of this drama that I find unnatural is that the fired (or forced-to-resign) employees all come to feel thankful for Tsubaki’s tough love. Few firings result in such happy endings in real life, in my experience. It is difficult even to fight against unfair dismissals. The show’s creators are perhaps trying to brainwash management and workers alike into thinking that dismissals make people happy.

There’s also the gender issue. Tsubaki does a great job in smashing the fixed role assigned to women in Japanese companies: smiling, polite, thoughtful. She shuns all politesse and tatemae (pretense) and represents the polar opposite of the blushing coquette image that many women in Japan cultivate so well. Some viewers may want to emulate her calculated cool. I can understand this, too.

But she is the enemy of her co-workers at Kyoa Fire. Recall that she was headhunted precisely to help heads roll. She is an outsider coming in to rip apart the workforce at the behest of management.

Another assumption is that the women who were already in the company (and not exposed to transmogrifying foreign/U.S. influence) are helpless without the aid of this outside heroine. The drama’s loud, obnoxious message flies in the face of the reality that women can and do band together in solidarity to improve conditions at workplaces every day. Together, these women hold the real power, not one tough cookie of a superheroine.

The number of foreign nationals working in Japan reached its highest-ever level in October 2017 at 1,278,670, according to a study by the labor ministry (bit.ly/mhlwhoudou). The foreign proportion of the population remains tiny compared to that in European countries or North America, yet the impact of the growing ranks of foreign workers is considerable in Japan, where the myth of ethnic homogeneity stubbornly persists (despite the existence of minorities, such as the Ainu and Okinawan people). What is this impact?

Well, that depends on the type of citizen being impacted upon. Let’s divide the citizenry into three broad categories based on their basic attitude toward foreign residents in general.

This month I will explore compassionate leave — called kibiki kyūka in Japanese — the days you take off after losing a close family member. I chose this topic because I recently suffered a string of painful losses. Please bear with me as I relate to you what has happened to my loved ones over the past couple months.

Do you remember my granny bunny? I told you about her and the need for pet loss leave exactly a year ago in my February 2017 column, “Japanese need to take more leave, starting with when beloved pets pass.” Readers from around the world wrote to me in response to that article, empathizing, expressing warm wishes, like “I wish I could have taken off work after I lost my hamster” and “I feel such sadness when I remember my cat’s death.”

Read moreLessons on life, love and compassionate leave from a silly old bunny

The Japanese government wants to raise the number of fathers taking paternity leave from 2016’s 3 percent to 13 percent by 2020, but two recent court cases show how hard it can be for some fathers to take their legally mandated paternity leave — especially if difficult pregnancies complicate the situation before the child is born.

On paper, mothers and fathers are entitled to take child care leave (ikuji kyūka) at the same time for up to a year and receive two-thirds salary for the first six months and half salary for the second six months. However, eligibility depends on having worked for your current employer at least a year and expecting to be employed a year later.

TOKYO — Years after losing his son, Itsuo Sekigawa is still in shock, grief-stricken and angry.

Straight out of college in 2009, his son Satoshi proudly joined a prestigious manufacturer, but within a year he was dead. Investigators said working extreme hours drove him to take his own life.

The young engineer fell victim to the Japanese phenomenon of “karoshi,” or death from overwork.